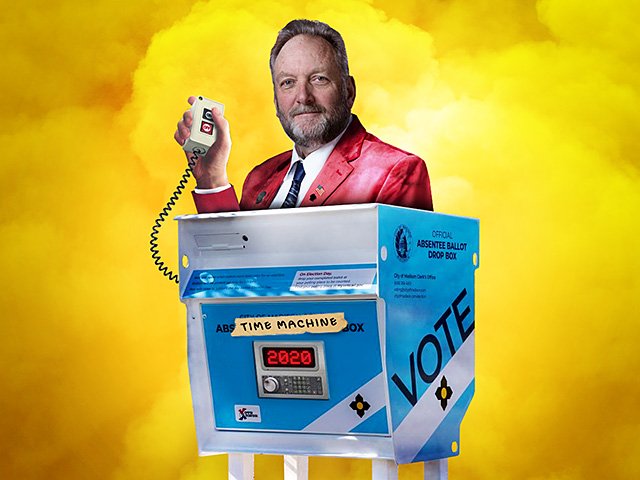 Rep. Timothy Ramthun (R-Campbellsport) is renewing his legislative effort to “reclaim Wisconsin’s 10 electoral ballots” submitted to the Electoral College in December 2020. At a Capitol press conference on July 12, Ramthun said the Wisconsin Supreme Court’s July 8 decision prohibiting the use of absentee ballot drop boxes applies to past elections as well.

“The use of drop boxes [is] illegal today and going forward. But they were also illegal in 2020,” Ramthun said. “Everywhere I go in the state, I hear constantly the people’s desire and need for closure on this issue. It will not go away until something is tangibly done.”

Ramthun, a Republican candidate for governor, has made false claims of widespread fraud in the 2020 election a centerpiece of his campaign. He said the court’s decision is reason enough to declare hundreds of thousands of votes “null and void” even though voters and local election clerks were explicitly told by the Wisconsin Elections Commission that drop boxes were legal in 2020.

“If you want to say that it’s okay to condone doing something wrong and illegal, just because,” Ramthun said before pausing, “Where’s the line there? We’ve got to follow the rule of law.”

The Wisconsin Institute for Law and Liberty (WILL) filed the case that prompted the ban on drop boxes. WILL president Rick Esenberg says the line Ramthun seeks doesn’t extend backwards in time.

“First, it is simply too late,” Esenberg writes in an email. “There is no mechanism for challenging electors once the results have been counted in a joint session of Congress and certainly the court would not permit a challenge at this late date.”

The new prohibition on drop boxes also isn’t grounds for challenging the legality of ballots cast in 2020, says Esenberg, because legal action was not taken before the election.

“Legally, this is really very straightforward. It’s just a court interpreting a disputed statute, and providing an authoritative reading, which is one of the basic things courts are supposed to do,” says Schweber. “The court’s decision on drop boxes does alter the way voting will occur going forward. But it has no effect on the legitimacy of electoral outcomes that have already happened.”

In response to guidance by the Wisconsin Elections Commission (WEC) provided to local election clerks ahead of the 2020 presidential election, communities across the state embraced installing absentee ballot drop boxes. It wasn’t the first Wisconsin election where drop boxes were used but it became a very popular option for voters during the pandemic, especially before vaccines were available. The exact number of absentee ballots cast via drop box for the November 2020 election isn’t known because many local clerks did not distinguish those ballots from absentee ballots that were mailed to the clerk’s office. In total, a record 60 percent of Wisconsinites cast an absentee ballot in some manner, including via drop box.

Before the 2020 election, the use of drop boxes had bipartisan support in Wisconsin. In a September 2020 letter sent to city leaders in Madison, Assembly Speaker Robin Vos and then-Senate Majority Leader Scott Fitzgerald (R-Juneau) — through an attorney — wrote, “We wholeheartedly support voters’ use of any of these convenient, secure, and expressly authorized absentee-ballot-return methods.”

“Every ballot that was placed in every illegal absentee drop box around the state of Wisconsin could not be counted under Wisconsin law,” Mueller said. “Because of that, I think there is no alternative but to decertify the past election from 2020.”

“We don’t know exactly the true outcome of the election. So how can you certify something that is unknown, and yet it was certified. So we have to decertify that to turn that switch back off again, and then move from there,” said Ramthun. “If this issue were to be taken up on the floor and voted through… [Biden] would drop from 306 to 296 [in the electoral college]. What happens after that is not up to Wisconsin.”

After the Wisconsin decision on drop boxes, Trump challenged Vos to take up Ramthun’s legislation to decertify the 2020 election.

“Speaker Robin Vos has a decision to make! Does Wisconsin RECLAIM the Electors, turn over the Election to the actual winner (by a lot!), or sit back and do nothing as our country continues to go to HELL?” Trump posted July 9 on his social media platform.

Vos did not support Ramthun’s first attempt to decertify the 2020 election and isn’t expected to now (Vos did not return Isthmus’ request for comment). However, this week fellow GOP candidate for governor Tim Michels wouldn’t say whether he would certify the next presidential election if Trump ran again and lost Wisconsin, echoing a similar stance from rival Rebecca Kleefisch. A Marquette Law School poll released in June found a majority of Republican voters in Wisconsin doubt the accuracy of the 2020 election results.

“My focus has been — since day one — transparency and truth,” said Ramthun, “I’m not a conspiracy theorist.”