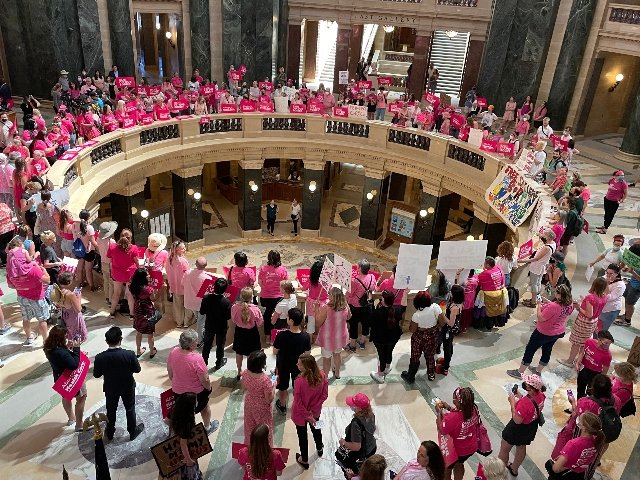 It took both chambers of the Wisconsin Legislature less than a minute, collectively, to open and close the special session called by Gov. Tony Evers to repeal the state’s criminal abortion ban. The gavel-in-and-out by the Republican-controlled Legislature was expected and it effectively ends any potential legislative efforts to repeal the 1849 statute in advance of the anticipated U.S. Supreme Court decision that, if it mirrors a draft ruling leaked in May, will overturn Roe v. Wade, the 1973 decision that legalized abortion.

At a rally in the Capitol Rotunda attended by hundreds of abortion rights supporters clad in pink T-shirts, Tanya Atkinson, president of Planned Parenthood Advocates of Wisconsin, condemned the swift action of the Senate, which convened its special session shortly after noon, noting that senators took just “10 seconds to consider the lives of Wisconsinites.” The Assembly took its turn a couple of hours later, dispensing with the special session in less than 30 seconds.

“It’s just so devastating and disappointing that Republicans are playing politics with not just women’s bodies but the democratic process as well,” said Rep. Dianne Hesselbein (D-Middleton), who was in the Assembly chambers for the proceedings. She says she and many of the supporters attending the rally had hoped that the lawmakers would at least allow debate on the proposed repeal of the ban.

“It is hard to believe that I have had more rights than my daughters will have,” added Hesselbein, 51, who has two daughters, 20 and 22.

Republicans have gaveled in and out of other special sessions called by Gov. Evers and GOP leaders made it clear this time would be no different. “Wisconsin law has not changed and our pro-life position has not changed,” Senate Majority Leader Devin LeMahieu (R-Oostburg) said in a news release June 8 when the governor called for the special session. “Killing innocent babies is not healthcare. We will gavel out of another blatantly political special session call from this partisan governor.”

Sen. Tim Carpenter (D-Milwaukee) issued a statement after the close of the special session, saying that “Republicans once again failed to show up for work today during the Special Session, ignoring the wishes of a majority of Wisconsinites, and doing nothing to prevent our laws from turning back 173 years to an era when women were second class citizens.” He also got in a dig: “I would not be surprised if several of them take per diems as if they came in for a full day’s work.”

If the high court does rule as expected, Wisconsin’s 1849 criminal abortion ban will go into effect. In anticipation of a ruling within days, Planned Parenthood, which operates three of the state’s four abortion clinics, is not scheduling appointments beyond June 25 and Wisconsin women are already being directed out of state for abortion care.

The Wisconsin statute makes it a felony for any person, other than the mother, to “intentionally” destroy the “life of an unborn child.” The only exception in the statute is to save the life of the mother. In that instance, the abortion would have to be performed by a physician, deemed necessary or “advised by two other physicians as necessary” and, unless an emergency, be performed in a licensed maternity hospital.

The latest Marquette Law School Poll came out today, which included questions on abortion. Rep. Kristina Shelton (D-Green Bay) referred to the results in a statement: “My colleagues from across the aisle stand in harsh opposition to what the people of our state want — the Marquette Law Poll results released today showed that 58 percent of Americans believe that access to abortion should be the law of the land, and yet our legislative majority disagrees. Instead of listening to their constituents, Wisconsin’s Republicans quickly gaveled another opportunity away.”