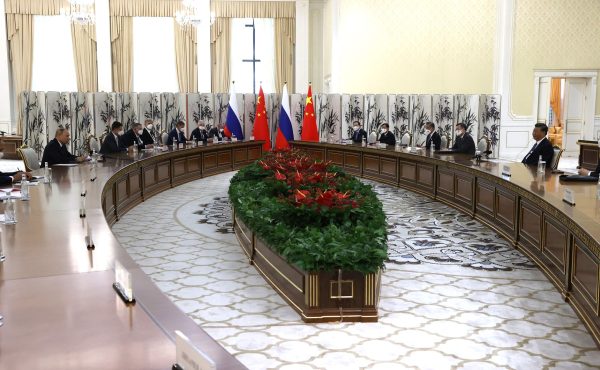 Regardless of how much Russia and China differ on tactics and style, they continue to share a worldview: The world is, as Chinese President Xi Jinping conveyed before his meeting with Russian President Vladimir Putin at the Shanghai Cooperation Organization (SCO) this week, beset by “change and disorder.”

And that disorder, Putin made clear in his own remarks and Xi alluded to heavily, is entirely the United State’s fault. The U.S., in this view, seeks to cling to a unipolar world while China and Russia seek to promote “democracy” — among states, that is, not people within those states.

It’s only by holding this worldview that one can comprehend the two leader’s statements, or the government’s readouts of the meeting, and not think it refers to some parallel universe.

Putin, as always, was more direct (and by default more absurd): “In general, I must say that the attempts to create a unipolar world have recently acquired an absolutely ugly shape and are absolutely unacceptable for the vast majority of states on the planet.”

He’s not referring to the Russian invasion of Ukraine, which began in late February 2022, but rather to the international community’s opposition and active response to it. The United States has mustered opposition to the invasion, particularly via NATO, but it has been far from alone in doing so. In fact, the Russian invasion pushed both Finland and Sweden to seek NATO membership after decades outside the bloc.

In his remarks this week, Putin — speaking for both Russia and China — said, “We jointly stand for the formation of a just, democratic and multipolar world order based on international law and the central role of the UN, and not on some rules that someone has come up with and is trying to impose on others, without even explaining what it is.”

In fact, international opposition is based on norms held as central to a peaceful world — and ironically, espoused ad nauseam by China — primarily mutual respect for territorial integrity and sovereignty, and the concepts of non-aggression and non-interference in domestic affairs of other states.

Putin did acknowledge in his remarks that China had “questions and concerns” regarding the “Ukraine crisis.” The Russian leader also, interestingly, said, “We highly appreciate the balanced position of our Chinese friends in connection with the Ukrainian crisis.”

China certainly has concerns about the war in Ukraine and the awkward position it puts Beijing in. A shared worldview keeps Russia and China on the same side, but it’s perhaps not a position China would chose to be in.

Putin, for his part, espoused full support for the One China principle and condemned the “provocations of the United States and its satellites in the Taiwan Strait.”

For Russia, it would be convenient if the world viewed Ukraine and Taiwan the same way: merely breakaway provinces that need to be returned to the fold, pesky domestic matters. But Ukraine and Taiwan are not the same. At the international level, Ukraine has been recognized as a sovereign state since the collapse of the Soviet Union in 1991 (including by Russia). Taiwan, on the other hand, exists in a strange diplomatic in-between: Only 13 of the United Nations’ 193 members, plus the Vatican, diplomatically recognize Taiwan.

In the Chinese readout of the meeting, Xi is stated to have said, “In the face of changes of the world, of our times and of history, China will work with Russia to fulfill their responsibilities as major countries and play a leading role in injecting stability into a world of change and disorder.” In this vein, China points to a parallel set of multilateral organizations (but don’t call them blocs) in which China and Russia play a central role: the SCO, the Conference on Interaction and Confidence-Building Measures in Asia (CICA), and the BRICS (Brazil, Russia, India, China, and South Africa).

Putin, in his remarks, lauded the SCO in particular for including “countries with different cultural and civilizational traditions, foreign policy guidelines and models of national development” that nevertheless “work on the principles of equality and mutual benefit, respect for each other’s sovereignty and refusal to interfere in internal affairs…” Putin phrased these principles as making it possible for the SCO to be an “effective mechanism for multilateral cooperation.”

While the SCO has garnered greater attention this year due to XI’s attendance after more than two years without leaving China, the body is hardly “effective.” Aside from existing and meeting annually, it’s difficult to say what it has accomplished since it was first formed. The very things Putin cites are at present points of tension: This week Kyrgyz and Tajik border guards exchanged fire along their still undemarcated border; and the India-Pakistan relationship can hardly be described as friendly or respectful.

Instead, what the SCO does “effectively” is serve as an alternative multilateral vehicle in which China and Russia are at the steering wheel, rather than the United States. The tandem works because they share a worldview that villainizes the old Western order. China may have the economic weight to shift political gravity all on its own, but Russia’s support lends legitimacy to the vision Beijing has of the future. As long as the two share that vision, whatever tactical disagreements exist can be overcome.

The Chinese readout of the Putin-XI meeting states, without apparent irony: “Both Russia and China stand for a more equitable and reasonable international order, setting a fine example in international relations.”