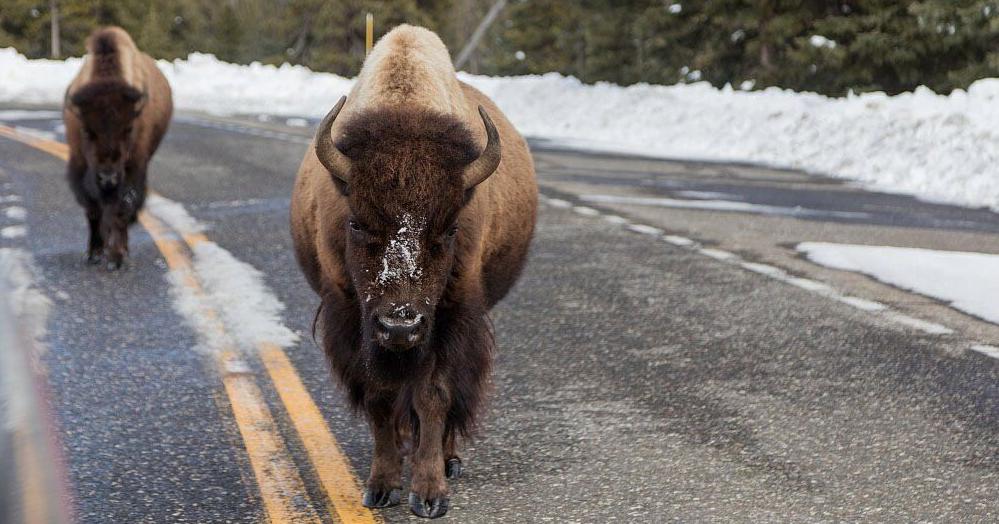 Yellowstone National Park reached a milestone this year. It turned 150 years old and we thought this particular birthday was worth noting.

President Ulysses S. Grant was not a big proponent of conservation, and yet, he was the chief executive to sign into law the Yellowstone National Park Protection Act 150 years ago this past March.

Now, there are63 national parks in 30 states, as well as the U.S. territories of American Samoa and the Virgin Islands. Another may soon join the ranks. Work is underway to designate the Chiricahua National Monument in Arizona a national park as well.

As for Montana, it can only claim 3% of Yellowstone, but the Treasure State boasts another national park — Glacier. At just over 1 million acres, the park, established in 1910, is less than half the size of Yellowstone, but, according to the U.S. National Park Services, has more grizzlies roaming through its mountains.

Yellowstone would not be the largest park, but hypothetically, it’s big enough to fit the states of Delaware and Rhode Island within its borders and still have room to spare. Alaska, in comparison, has eight national parks and also claims the largest national park — the Gates of the Arctic at 8.5 million acres.

Take a guess, though, which one is more popular. If you guessed Yellowstone, you would be correct. Its popularity has grown with each passing year. Last year, the U.S. National Park Service noted Yellowstone had 4,860,537 visitors. In comparison, Gates of the Arctic averages less than 12,000. There’s a good reason for that, though. Unlike Yellowstone, you can’t drive through this park because there are no roads. To get there, hiking would be best. Some adventurers book passages on a small plane to reach the park, too.

There is a downside to Yellowstone’s popularity.

More than 5,000 bison make their home in Yellowstone. “Keep Your Distance” signs can be found throughout the park. They are hard to miss. Some tourists do not heed the warning and despite their size, which can be upwards of 2,000 pounds, bison can move very quickly. Bison attacks inside the park are not frequent, but they are certainly not unheard of either. Since 1978, there have been around 90 bison attacks. Sadly, two people have died.

In the age of social media, park guests sometimes record their stupid antics with their cell phones. No one would deliberately get too close to a grizzly bear. That would be ludicrous. Apparently, though, getting a selfie with a bison is often considered worth the risk, as is getting too close to one. One woman was caught on camera trying to pet a bison, which appeared not too happy with her gesture.

There have also been documented run-ins with moose, elk, deer and other wildlife. These encounters are mind-boggling and frequent enough that there is a YouTube channel devoted to the subject called “Stupid Yellowstone Behavior.” For more sardonic laughs, check out the Facebook page aptly titled “Yellowstone National Park: Invasion of the Idiots.”

Want to learn more about our nation’s first national park? There’s plenty out there. Below are just some of the more interesting facts.

—During the famous Corps of Discovery journey, which began in 1804, neither Capt. Meriwether Lewis, nor Capt. William Clark passed through Yellowstone. It is believed that Clark got the closest as he passed through Livingston while making the long trip back to St. Louis, Missouri.

—Thanks to officials with the Northern Pacific Railroad, Yellowstone’s original nickname was not too imaginative and was simply “Wonderland.”  A bit more thought was put into Glacier’s nickname — “Crown of the Continent.”

—Twelve years after being designated a national park, Congress abolished hunting within Yellowstone’s boundaries. It was noted in The Anaconda Standard of May 29, 1894, that “all persons caught killing game within the confines of Wonderland will be amenable to the rigid game laws of Wyoming.”

—You just might go “batty” while visiting Yellowstone, as there are 13 species of bats roaming the park.

—Numerous reports had made their way back to Washington, D.C., describing the abundant grandeur to be found in the American West. That led to Congress funding the Hayden Expedition of 1871, to explore northwestern Wyoming. Led by an experienced explorer, physician and geologist, Ferdinand Hayden, the team included botanists, a zoologist, a meteorologist, an entomologist, and a statistician. American financier Jay Cooke added to the expedition’s coffers and Hayden was able to bring along a topographer, artist and a photographer.

—British painter Thomas Moran was an enthusiastic participant in the 1871 Hayden Expedition to Yellowstone. With paint brush in hand, his job was to document Yellowstone scenery. He excelled at it. So much so, one of his many Yellowstone paintings, “The Grand Canyon of the Yellowstone” was sold to Congress for the staggering amount of $10,000. In 2022, ten grand is the equivalent of approximately $236,000.

—Renowned photographer William Henry Jackson distinguished himself as well during the 1871 expedition. He became the first photographer to showcase the beauty that is Yellowstone.

—Henry Wood Elliot was not only an artist, but a passionate conservationist. Just like Moran and Jackson, he signed on with the 1871 expedition. As part of the team, he drew the first bathymetric map of Yellowstone Lake and also painted the famous watercolor titled, of course, “Yellowstone Lake.”

—Philetus W. Norris was the park’s first paid superintendent, a position he held from 1877 to 1882. Three Yellowstone mountain peaks, including Mount Norris, bear his name. If you thought the town of Norris in Montana’s Madison County was named for him as well, you’d be wrong. The Montana town’s founder was Alexander Norris, no relation to Philetus. By the way, Philetus is from the Ancient Greek meaning beloved.

—“Rocky Mountain Harry Yount” was perfect as the first national park ranger. A one-time Union Army sergeant, Yount was an experienced mountain man and prospector who served as a guide for several Hayden Geological Expeditions in the West, including Yellowstone. Yount held his Yellowstone position for a short period, from 1880 to 1881. He, too, had a Wyoming peak named after him. Younts Peak is located in the Teton Wilderness.

—With much fanfare, President Teddy Roosevelt paid a visit to the park in 1903. An avid outdoorsman, the 26th president strongly believed in preserving public lands. “There can be nothing in the world more beautiful than the Yosemite, the groves of the giant sequoias and redwoods, the Canyon of the Colorado, the Canyon of the Yellowstone, the Three Tetons,” he once wrote, “and our people should see to it that they are preserved for their children and their children’s children forever, with their majestic beauty all unmarred.” Built in 1920, the rustic Roosevelt Lodge in Yellowstone was named after him. Reportedly, it was constructed near one of the president’s favorite campsites.

—President Roosevelt was not our nation’s only chief executive to pay Yellowstone a visit. Chester Arthur, Calvin Coolidge, Warren Harding, Franklin Roosevelt, Gerald Ford, Jimmy Carter, George H.W. Bush, Bill Clinton, and Barack Obama also spent some time in the park. President Ford must have felt right at home as in 1936, he worked at Yellowstone as a National Park service ranger.

—Although Yellowstone was established in 1872, the U.S. National Park Service was not founded until Aug. 25, 1916.

Yellowstone National Park became a reality on March 1, 1872, and the park was in good company. There were many firsts that year.

The U.S. Patent Office issued its first patent in 1872, and Vaseline and dried milk, products still used today, became available to the public.

Victoria Woodhull was the first woman nominated to the nation’s highest office, the U.S. presidency, and Montgomery Ward sent out their first “catalog,” which actually was just a one-page listing of more than 160 items.

Arbor Day was first celebrated in Nebraska, the “Cornhusker State,” and Popular Science magazine made its debut.

The Big Apple in New York had much to brag about. Opening in 1872 was the Metropolitan Museum of Art, along with Bloomingdale’s, which featured European fashions.

The penny postcard got “two thumbs up” from Congress, and inventor Alexander N. Lodygin first introduced his incandescent light bulb.

—California has the most national parks, with nine. Currently, the Oak Fire is being fought just outside Yosemite National Park with more than 17,000 acres already burned.

—Montana most devastating earthquake occurred on the night of Aug. 17, 1959. Madison Canyon near Yellowstone was its epicenter. Twenty-eight people were killed and the 30-second tremblor not only caused a mountainside to shift, but it created Quake Lake. The 7.3-quake shook up a lot of park guests in more ways than one. By the next day, many tourists decided to hit the road. It shook up the park, too, and had long-lasting effects on its hydrothermal features. According a 2019 report published by the U.S. Geological Survey, “at least 289 springs in the geyser basins of the Firehole River had erupted as geysers” by the next day. It continued — “of these, 160 were springs with no previous record of eruption.” The USGS closely monitors earthquakes. On a yearly basis, Yellowstone averages 1,500 to 2,500 a year. Last year exceeded that number, which totaled 2,773.  The strongest quake since 1959 occurred within the park on June 30, 1975 with a 6.1 magnitude.

—Snow fell on Sept. 11, 1988, and it arrived just in time. That year, summer blazes destroyed more than a half-million acres in Yellowstone. That quarter inch precipitation helped to douse the flames. The summer of 1988 was hot and dry, with 51 fires that year — 42 were blamed by lightning, nine others were produced by humans. The damage was staggering, with the fires affecting nearly 36 percent of the park.

In conclusion, several people have shared their opinions through the years on Yellowstone, mostly good, some bad, and literary giant John Steinbeck and explorer and conservationist John Muir were no different.

Yellowstone is not everyone’s cup of tea. Steinbeck, who wrote such classics as “The Grapes of Wrath” and “Of Mice and Men,” was not a fan. To be fair, he loved Montana. He said this of the Big Sky Country — “I’m in love with Montana. For other states I have admiration, respect, recognition, even some affection. But with Montana it is love. And it’s difficult to analyze love when you’re in it.”

Regarding Yellowstone, though, he was not enamored — “For it is my opinion that we enclose and celebrate the freaks of our nation and civilization. Yellowstone National Park is no more representative of America than is Disneyland.”

Muir, who twice visited the park, felt just the opposite. One of the founders of the Sierra Club, an environmental organization, he was quite descriptive when talking about Yellowstone, describing it as a place where “harmony rules supreme.”

He went on to say — “Linnaea hangs her twin bells over the rugged edges of the cliffs, forests and gardens are spread in lavish beauty round about, the nuts and berries ripen well, making good pastures for the birds and bees, and the bears also, and elk, and deer, and buffalo — God’s cattle — all find food and are at home in the strange wilderness and make part and parcel of the whole.”

An Anaconda Standard reporter may have said it best, though, and his thoughts remain relevant. On Dec. 21, 1902, he wrote: “The park’s splendors endure just the same, and those who, having its attractions within their reach, fail to look upon them, miss a spectacle which, once witnessed, remains through life a memory well worth cherishing.”

Get local news delivered to your inbox!